Official name of the Palace:
9. Palace of Pantaleo Spinola

The site of the palace of Pantaleo Spinola – now Banco di Chiavari – for several good reasons appeared to be privileged. First on the letfhandside of the street, like palazzo Cambiaso it had the honour of opening the prestigious parade and of enjoying the desirable view on the square of the Fonte Moroso; moreover its position on the side towards the sea granted a continuity with the elegant area of Luccoli, a feud of the Spinola family for four centuries. It participated in the sumptuous social life of the new district, though still feeling at home, thus proving to be still linked to the social logic which until a few years earlier had dominated the choices of Genoese nobility.

But the new palace did not bring luck to his owner. The family’s privileges were not missed by the attentive management of the City Fathers, so that Pantaleo Spinola, by deed of 8 March 1558, had to buy the smallest of the areas on sale at one of the highest prices. Moreover, he died in 1563, without having entered his new house, already erected, but without door and window frames and fittings.

He had entrusted the design and the direction of the building to the architect Bernardo Spazio, a master builder of mature experience, but also engaged by Alessi in the innovative building yard of the Sauli basilica at Carignano. This assignment seems to guarantee the good tradition keeping up with the times; the same criteria used in the choice of the area. Maestro Bernardo had punctually replied by adapting his archaic spaces of vertical monumentality to the agile and modern distribution scheme inspired by Alessi. He survived his client only few months and was substituted for the interior fittings by maestro Gio. Pietro Orsolino. The street façade, barely animated by lateral avantcorps and scanned by the linear simplicity of the string-courses and holes, acquired within the century itself the elegant portal typical of the Genoese mannerist tradition with a curved tympanum surmounted by the statues of Prudence and Vigilance. The coat of arms was that of the Spinola family until the end of the eighteenth century, then of the Giustiniani family, and when the palace became the property of the Gambaro family the statues were “plastically draped over the naked breasts to the late consolation of the squeamish”.

More important were the modifications of the second half of the seventeenth century made to enlarge the dimensions in depth, in effect rather lacking, by moving the external wall downhill and creating a courtyard with an overhanging terrace. This intervention, more than creating new rooms, served the purpose of enlarging the spaces for celebrations and enhancing the parade of reception rooms which in the first design – observing it on Rubens’s plan – appeared too simple and domestic. So, in the entrance hall, a flight of stairs was added symmetrically to the grand staircase, while the new porched courtyard with a beautiful octagonal design ended in the scenery of a grotto. The courtyard has been covered in our century for the installation of the Banco di Chiavari, the last and final owner. Moreover the lateral view on the square has today an altered plinth owing to the lowering of the road level made during the last century.

Under the aspect of self-celebration, which is fundamental in Strada Nova, it can be said that this palace was born in the seventeenth century, because only when it had its spaces enlarged, was decoration provided. Though it belonged to the Spinola family for over two centuries, not the direct heirs of Pantaleo, but the branch of Arquata inherited the property and had the means and the will to begin with this enterprise.

Around 1630 Giovanni Carlone, of the wellknown family of decorators active for many generations, worked on the vaults of three subsequent drawing-rooms on the ground floor. The subjects of the central medallions – The End of Assalonne, Susannah and the Old Men, The Judgement of Solomon – were taken from the Bible as was fashion in those years and in the heart of this skilled fresco painter of latemannerist naves.

His brother Giovanni Battista, younger and more experienced in the wonderful chromatic decorations which from Strozzi on enlivened Genoese painting, is recognized in two drawing-rooms on the upper floors decorated with Roman histories: The Meeting of Coriolano with his Family, the End of Lucretia, in five episodes, and The Rape of the Sabines. Still of historical inspiration, although of lesser value, are the sixteenth century frescoes in three other small rooms by the workshops of the Calvi and the Semino families.

A very different celebration quality can be seen on the “piano nobile” of this dwelling. Already in the antechamber Putti and Virtues by Domenico Piola with “ornaments” by the Emilian painter Paolo Brozzi introduce these two great interpreters of the decorative genius of the Genoese Baroque style. In the great vault of the hall, Piola depicted a very animated Allegory of Peace, whose protagonists are the god Janus, Peace and Jupiter among the train of heavenly inhabitants. The rigorous composition arranges on different plans in a spiral of drapes and gestures these figurative blocks which pass over the frame, towering majestically over heaps of clouds, breaking through aerial distances. The trompe-l’oeil and the foreshortened architectures which enclose and support the host of leads and the supporting figures are by Brozzi. This amazing pair of painters worked together again in a drawing-room to develop another mythologic-allegorical theme of Christian-pagan celebration: The Sibyl shows the Image of Mary to Augustus.

The triumphal parade, entirely in the Baroque style, ended beyond the hanging terrace with the marble group of The Rape of Helen, by the French artist Pierre Puget. It was lodged in the grotto to revive the sight of several generations of noble hosts and to urge the descriptive emphasis of the city art chroniclers, until it was in place: now, after several migrations it can be admired in Palazzo Rosso. Finally, Antonio Quinzio, commissioned by the Banco di Chiavari in the first quarter of our century, tried to emulate the Baroque eloquence in the ground floor hall with allegories interpreting in the taste of the time the good civil and commercial progress in a late-liberty style conformably dated. As to celebrations, this palace precociously erected but a little understatedly and subsequently forced to enclose the explosion of deceptive space of painted Baroque, maybe more than any other keeps up the profile of the street. Adequate exhibitions and the majority of the cultural symposia of the town find a wonderful reception in the magnificent hall with the sponsorship of Banco di Chiavari, which in other rooms also hosts a collection of paintings of Genoese culture saved from the dispersion of the market. 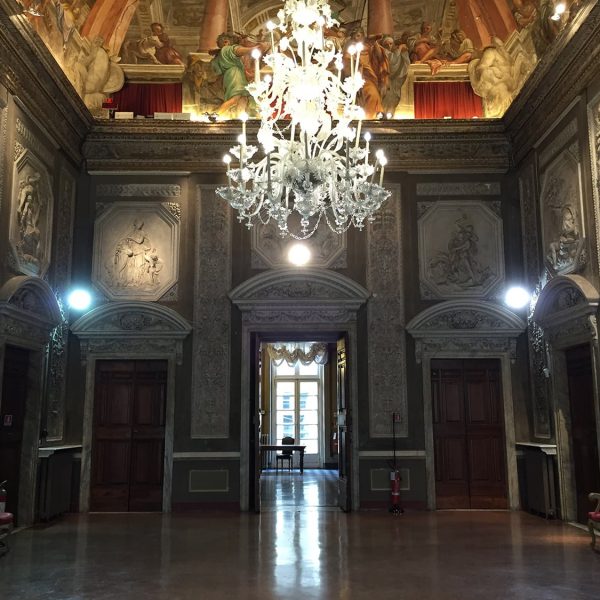 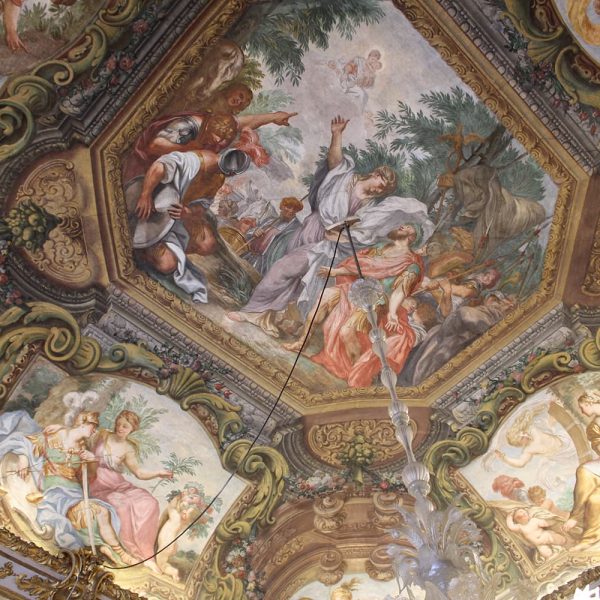 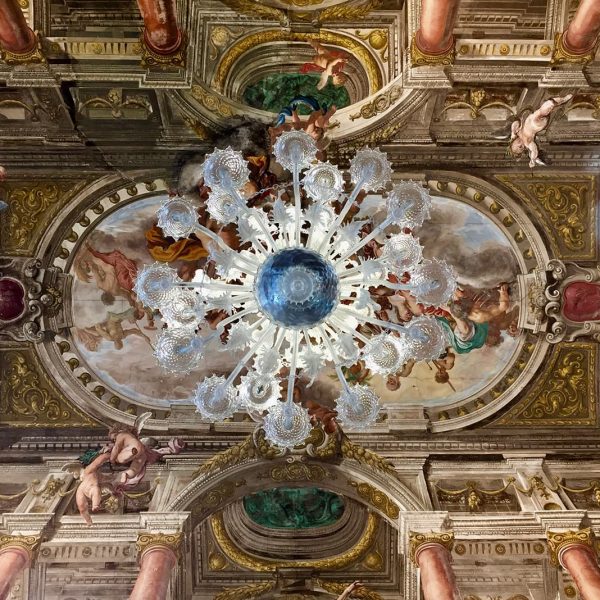 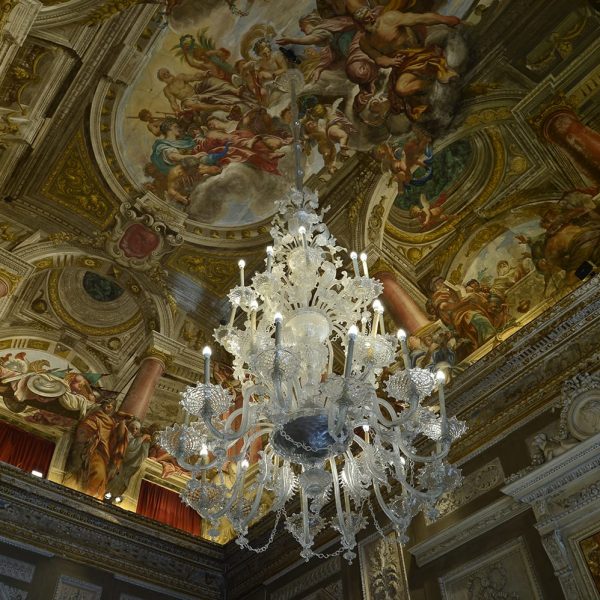 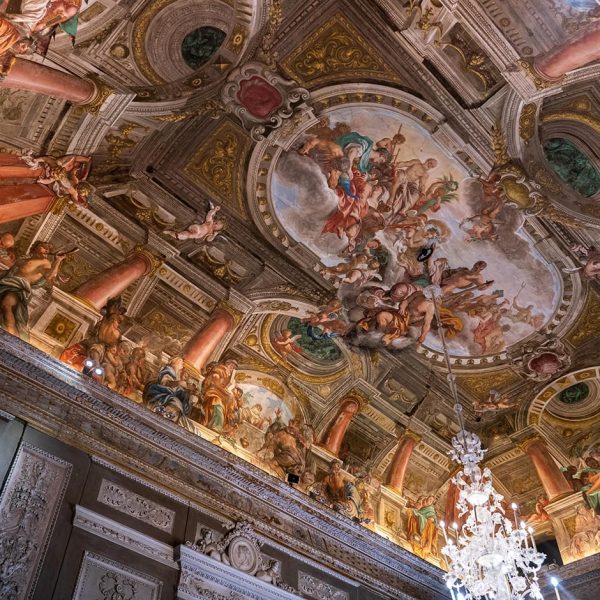