Official name of the Palace:
40. Palace of Ambrogio De Nigro

The palazzo Ambrogio Di Negro is located in a square, piazza Banchi, which for years was a meeting point for merchants and bankers of the old Republic of Genoa.
In the XVI Century the need arose for new more expansive urban spaces to enhance the relationship between the type of building and urban configuration using solutions such as wider squares or straight roads, allowing the architectural perspective to be read in a greatly improved manner.
The new construction was part of an urban rebuilding programme which involved converting portions of the urban fabric by demolishing two of the Di Negro loggias, widening via Ponte della Mercanzia and developing the new Stock Exchange (Loggia dei Mercanti). The urban renewal started with the construction of the church of S. Pietro, rising above a group of workshops developed to finance the work.
The site serves to reaffirm the power of the Albergo in the form of an amalgamation of associated houses, the result of a lengthy and complex process of appropriation of land for independent building purposes.
The palazzo, which was erected between 1569 and 1572 by Ambrogio Di Negro, the doge, a cultured businessman, is included in the Rubens edition and was recorded in the Rolli in 1576, 1588, 1599, 1614 almost invariably in the first Rollo.
We are in a period in which strong links existed between the Genoese aristocracy and the Spanish Crown. It is probably the most prosperous period in the economy of the Republic. The lively trade in precious metals meant that the Spanish monarch made regular loan repayments to the Genoese bankers, adding substantial sums to their coffers. And it was by financing the Spanish crown that Ambrogio, in partnership with Andrea Spinola, was able to increase his wealth eleven-fold between 1554 and 1601.
Palazzo Di Negro features two important frontages, one overlooking the square and the other on Carrubeus Rectus (via S. Luca). The one overlooking the road offers the best perspective and provides access, crossing through the Di Negro family’s private square, creating a way through between S. Luca and the Mercanzia bridge.
Moving through the ultra-spacious colonnaded atrium to the staircase, which climbs up to the second floor and overlooks a loggia three sides of which extend over several floors.
On the second floor a set of promontory stone doorways provide entry into a suite of rooms.
The Rubens drawings show that the larger rooms overlook via S. Luca and seem to be located between two loggias on the second piano nobile (known as the piano di sala), whilst in actual fact there is only one loggia, which belies the concept of the typical symmetry normally found in the type of house. In addition, the Rubens version does not show the benches and workshops, which certainly did exist and served to confirm its status as a “mercantile palazzo”. The mingling of aristocratic stately buildings and trade activities is a characteristic peculiar to the whole city particularly in the Banchi zone. Moreover, Rubens’ depiction of the building shows an idealised view of a palazzo, as an autonomous entity having no relation to the other Di Negro buildings and ignoring the fact that three building structures had been amalgamated: the original aristocratic palazzo, a family tower on vico Di Negro and a number of mediaeval lots on S. Luca.
The decision to construct a façade painted with architectural motifs (1590- 1596), instead of one incorporating stone elements, could be seen as an expedient adopted both for economic reasons and due to lack of space available, to create an architectural illusion. This device was an innovation for piazza Banchi in the mid-Sixteenth Century, a century still known for its mediaeval constructions; it would serve as a reference model for constructing other painted facades on the square. The emerging political figure of Ambrogio Di Negro, who would become Doge a few years after the Palazzo was built, stands alongside this new architectural image. Subsequent owners would be his son Orazio at the beginning of the Seventeenth Century followed by Giò. Gerolamo Di Negro.
The frescoed rooms on the second piano nobile having the following themes are worthy of mention: the large room, Helen and Paris and adjoining rooms overlooking Banchi Danae and Jupiter, Orazio Coclite on the Sulpicio Bridge attributed by Gavazza to the workshop of the Semino, including Andrea, for the central salon panelling.
E. Parma surmises that Bernardo Castello also worked there on some of the panelling in the room with Minerva and the Muses representing one of his first works, whilst Ottavio Semino and Andrea’s two sons, Cesare and Alessandro, are said to have worked on the other rooms.
The decoration of all the frescoes was thoroughly restored in the Eighteenth Century (2nd February 1869) and one very recently, which has brought them back to their former splendour.
The Palazzo remained with the Di Negro family up to the beginning of the Nineteenth Century, continuing to be a site of important trading activities and benefiting from a total refurbishment together with the church of S. Pietro.
Updated bibliography post 1998
E. Poleggi, Genova. Una civiltà di Palazzi, Cinisello Balsamo (Milano) 2002, pp. 100-101 (Palazzo di Ambrogio Di Negro (1569-1572))
The texts have been updated thanks to the INSIDE STORIES project financed with funds - Law no. 77 of 20 February 2006 "Special measures for the protection and enjoyment of Italian sites of cultural, landscape and environmental interest, included in the "World Heritage List", under the protection of UNESCO.
The Rollo in the Geoportal. 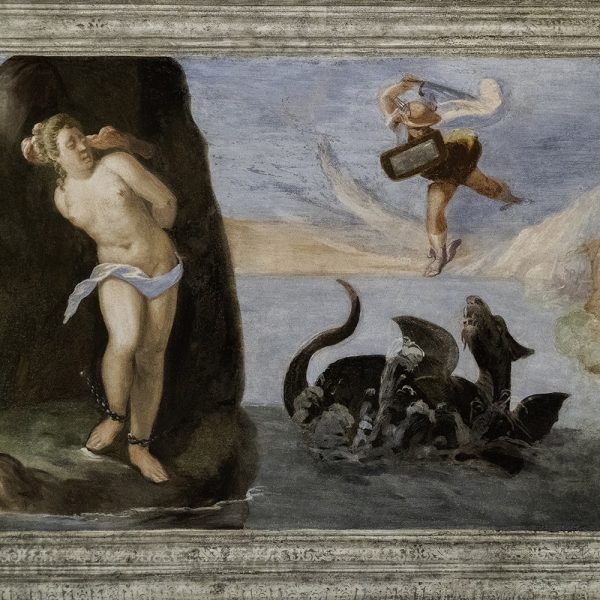 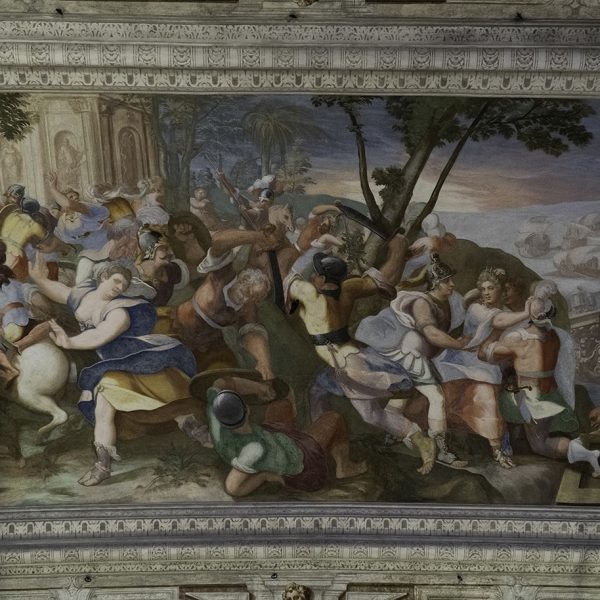 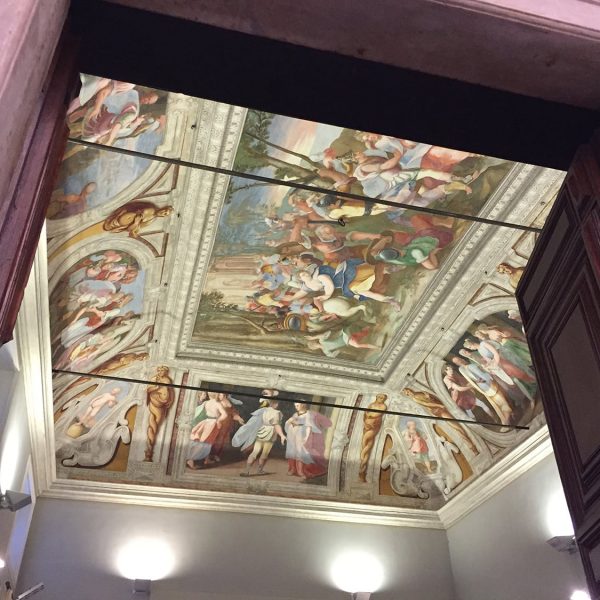 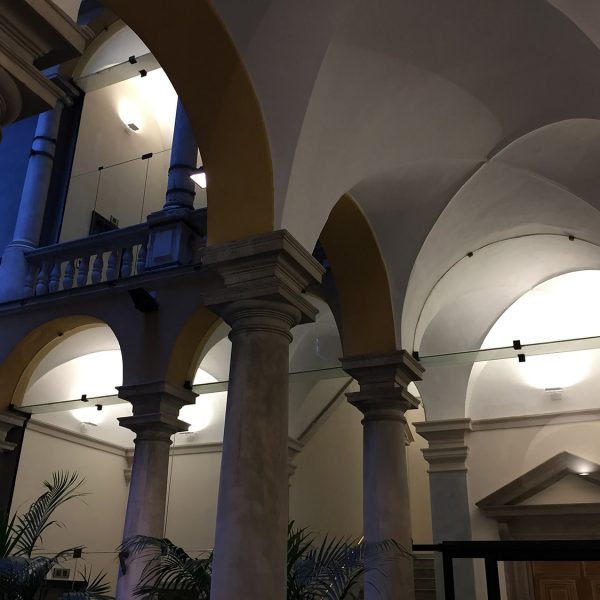 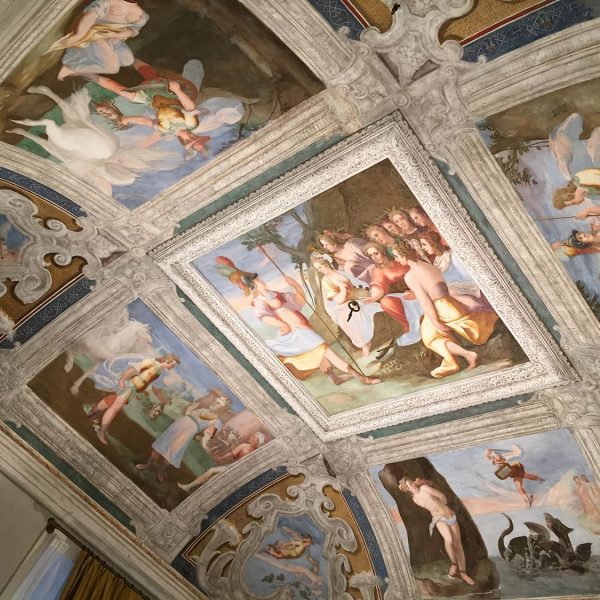