Official name of the Palace:
3. Palace of Giorgio Spinola

The palace appears in the rollo of 1558 under the name of the heirs of Gio. Batta Spinola, while it subsequently passed into the hands of Agostino Airolo (1664/1). lt is situated in the Spinola di Luccoli district, next to the ancient convent of Santa Caterina and might have been built just before its first mention in the roll.

The loggiaed staircase winding around the internal courtyard with a centrai fountain (today covered by concrete and glass) leads to a large area towards Villetta di Negro. This is another example of the difficulty of building on a hillside, as more and more houses were erected uphill of the street, as had occurred to the north of Strada Nuova, which was already at a certain height above the sea. In 1798, the house still belonged to the Airolo family, who renovated it, replacing the external marble portal and modernizing details in the entrance hall, adding railings to the windows and decorating the drawing rooms. In the 19th century, the palace passed to the Franzoni family (pre 1818) and then to the Tedeschi family. Recent work has restored the quadratura on the fronts overlooking Salita di Santa Caterina and Salita Di Negro. Today che building contains offices and private flats.

The texts have been updated thanks to the INSIDE STORIES project financed with funds - Law no. 77 of 20 February 2006 "Special measures for the protection and enjoyment of Italian sites of cultural, landscape and environmental interest, included in the "World Heritage List", under the protection of UNESCO.

The Rollo in the Geoportal. 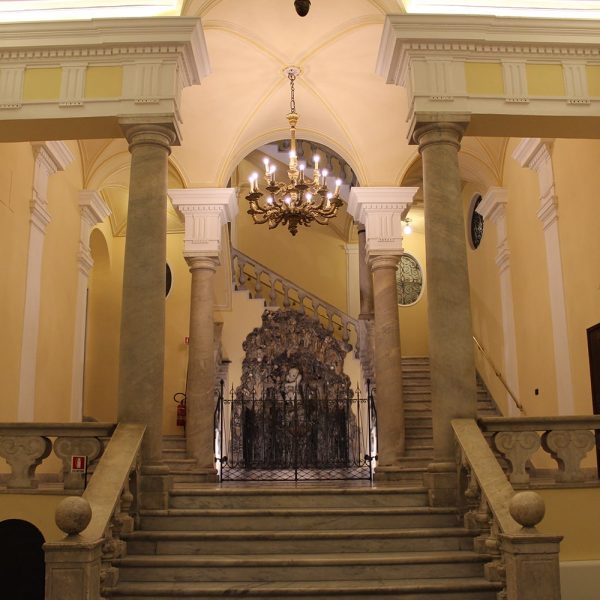