Official name of the Palace:
11. Palace of Tobia Pallavicino

It has represented for more than four centuries with splendid authority a happy moment and a fortunate situation in the Genoese sixteenth century architecture. It is true that from the first decades of the eighteenth century, it supports the added elevation of one floor and the addition of a body on the area which was part of the garden, not deplorable interventions since they provided a remarkable decorative enrichment. It is however convenient to ideally behead it of one floor with the support of the plan by Rubens for a first reading of the façade which has two horizontal bands in superimposed orders – a robust continuous ashlar on the ground floor and Ionic pilaster strips in pink Finale stone on the first floor – well fitted windows on seven axis with alternatively triangular and curved tympana. There was also a band with coupled columns and as a conclusion the Genoese slate roof in the shape of a truncated pyramid.

All these elements corresponded in the composition of the elevation to pictorial effects which eluded the monumental view: a façade with lights and shades skilfully drawn, which does not hide its descent, neither still nor repetitive, from the style of the Roman architecture of the Raffaello school. The author is a painter, a sculptor and an architect of the truest mannerist tradition; his name is Giambattista Castello, known as “il Bergamasco”, because he came from Bergamo to work in Genoa as a leading artist for about two decades until 1567, in the years of the prestigious building fervour, and not only in “Strada Nuova”. His sponsor, as luck would have it, was the builder of this palace, Tobia Pallavicino, brother of that Agostino who established himself in the fore, coming from a very noble family and industrial leader, with businesses and agents all over Europe, rich also in cultural interests and patron of the arts. The Bergamasco had taken care, on his behalf, of the decoration of his splendid villa – “called delle Peschiere” – built only a decade before on a project by Galeazzo Alessi on the hills of Multedo to the East gates of the town. There was then a consolidated understanding between artist and client, with so high a level of creativity, taste and experimentation as would rarely he equalled, even in the most prestigious building yards. The elevation of the eighteenth century has superimposed on the façade a decorous Corinthian order of anonymous quality. Inside, the distribution of spaces and of rooms affording access to others showed a new interesting autonomy. On the ground floor the triforum had a precise function of screen on the raised gallery with two symmetric staircases and had the function of vestibule of the room opening on the hanging garden, subsequently covered. This solution will be often copied in the following centuries and also exported by Bergamasco himself into Spanish palaces. The first floor followed this space distribution, so that the anteroom looks onto the street while the hall superimposed on the lower floor looks onto the garden. The architectural decoration is perfectly integrated with the stucco and fresco one, all by the same artist. The rich and mobile play of the mouldings in the capitals of the columns creates on the walls a precisely outlined continuous trabeation to which frames and tympana of the doors match in the details. On the ceilings the white stucco of the ground floor and the coloured one of the “piano nobile” is moulded with inexhaustive invention into friezes, panels, hermae, spirals, festoons and frames, along arches and underarches, to profile vaulting cells and enclose frescoes. These latter, pictured with mythological and allegorical subjects – Gods of the Olympus, Apollo in Parnaso, Apollo and Daphne on the ground floor, Apollo the citharist and Figures playing music, Mercury and Argus, Psyche and Cupid, respectively in the entrance, vestibule and two drawing-rooms of the piano nobile – conserve unaltered precious colours in the soft panels and in the solid modelling of figures which are at the same time flying lightly on the clouds. The decorative intervention of the eighteenth century concerned added or restyled spaces on the first floor. In the halls, the drawing-rooms and above all in the gallery, which closed to the south the building on the garden, the sinuous sculptures in golden stuccoes characteristic of a little known Genoese rococo style, but not less precious and rich in inventions than those celebrated in other places, enclosed frescoed medallions with Stories of Aeneas by the same artist Lorenzo De Ferrari. 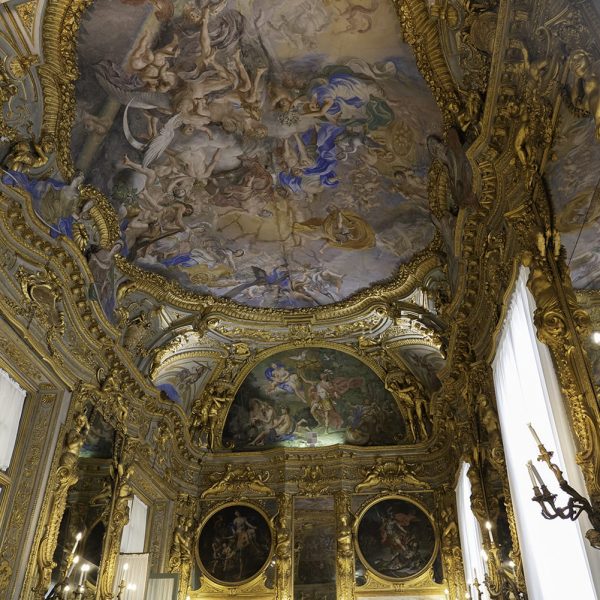 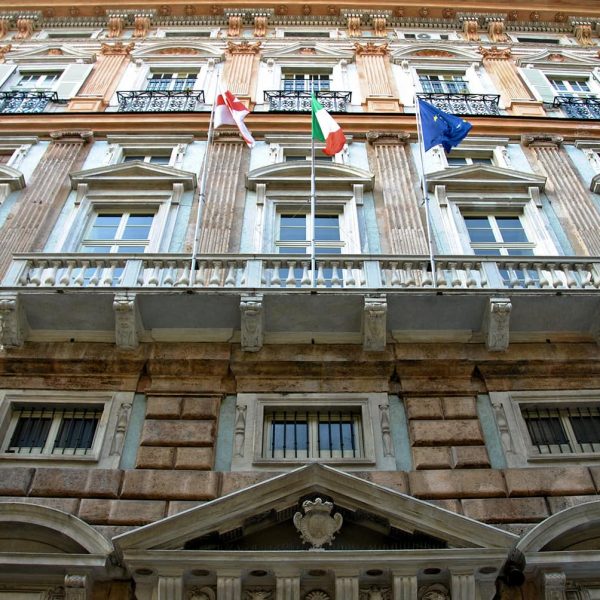 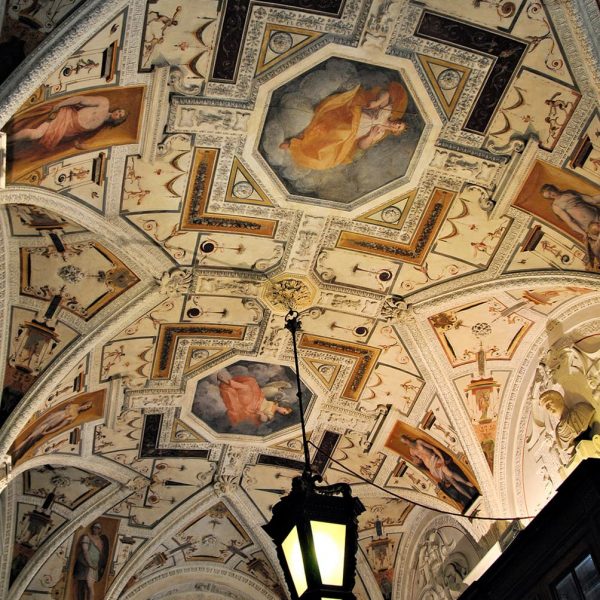 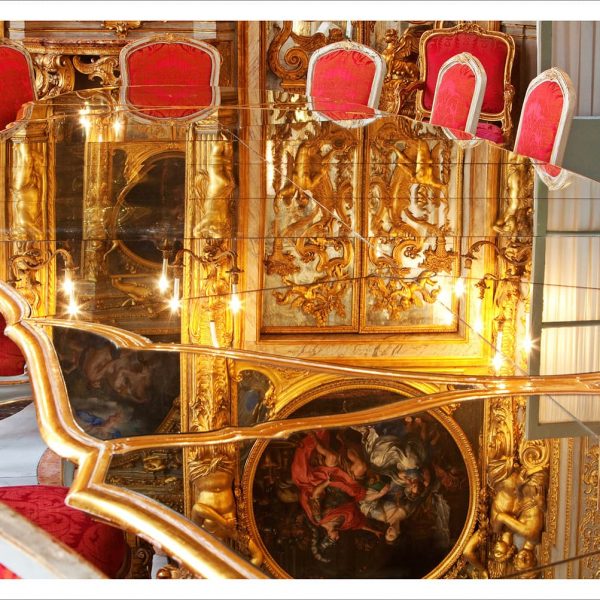 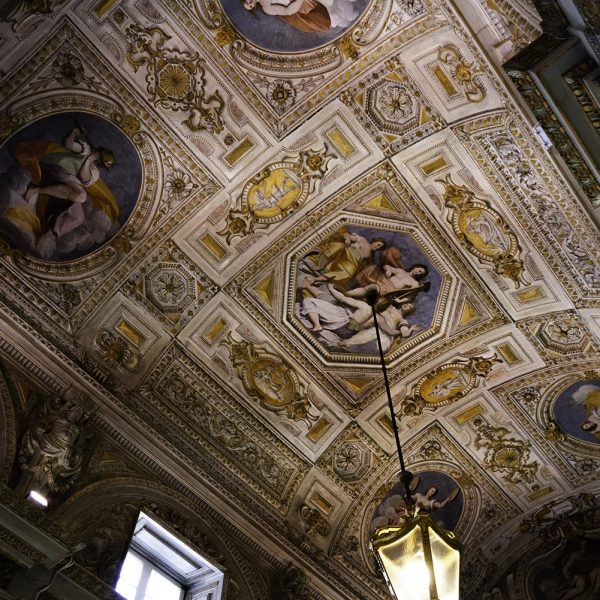