7. Palace of Paolo and Niccolò Interiano

Official name of the Palace:
7. Palace of Paolo and Niccolò Interiano

The first information available on the construction of the palazzo dates back to 1565 when Ludovico Interiano, together with his two sons Paolo Battista and Nicolò, were granted their request presented to the city magistrates to occupy about a metre of public land. This would bring the elevation of the building that he intended to raise in line with that of the neighbouring houses. The construction could not be started before 1566, given that the debris resulting from the levelling of the hillside that still today rises behind the palazzo had still not been removed in full. The project was assigned to Francesco Casella, one of the Canton Ticino architects who for centuries enjoyed a virtual building monopoly in Genoa. The original aspect of the building and its overall similarity to the current structure are witnessed by two illustrations (façade, three plans, longitudinal and cross sections) which appear in the publication I Palazzi di Genova edited by Pietro Paolo Rubens and printed in Antwerp in 1622, where it is identified as “Palazzo G”.

The principal difference compared with the existing building concerns the decoration of the principal fa¸ade which, as originally designed, was to have been in ashlar, and the five vertical rows of windows on the two upper floors were to have been divided by pilasters: in actual fact a fresco painted fa¸ade was built with three rows of niches and mock statues in the larger bays. A document from 1585 reports that the brothers Paolo Battista and Nicolò Interiano, who had taken over the property from their father, appointed Pantaleo Calvi (1510?-1595) and his son Benedetto to decorate six rooms in the palazzo. It was around the same date that the façade was probably decorated with figures of virtue, on which Benedetto’s brothers, Aurelio and Felice Calvi, also worked. The use of the painted façade, which also extended to the palazzo’s rear façade, is one of the distinctive features of Genoese building from the Fifteenth to the Eighteenth Century. This is one of the examples which can be most appreciated nowadays, not only due to the alterations (XIX Century) and restorations (2000), but also thanks to the favourable perspective offered by the piazza. The lack of descendants in the Interiano family meant that by the XVII Century the building had passed to the Centurione family, but it is not known in which year exactly; whilst it was certainly for inheritance reasons that in 1797 it became the property of Marchese Luigi Grimaldi della Pietra, who had occupied the second floor in previous years. In 1820 the latter sold it to Duke Pietro Vivaldi-Pasqua, and the new owner was responsible for a number of interior decorations, only some of which remain today, under the direction of the architect Pietro Pellegrini (1789-1827) assisted by the painters Michele Canzio and Filippo Alessio and sculptors Bartolomeo Carrea and Giuseppe Gagini. In 1836 Marchese Domenico Pallavicino bought the palazzo for the sum of “new Piedmont Lire 250.000, having regard to the costs and improvements carried out by Pasqua”, as stated in the deed of purchase, and the most significant decorative work was carried out since that date. The credit for this lies primarily with Teresa Corsi, the Florentine gentlewoman who had married Marchese Domenico Pallavicino: well-known for being a true patron of the arts of her time, and a woman of great taste, she appointed the Genoese architect Gaetano Vittorio Pittaluga to direct the works that resulted in the renovation of the rooms. The artists Federico Peschiera (1814-1854) and Michele Canzio (1788- 1868) were responsible for restoring and adding the Calvi frescoes to the atrium and staircase vaulted ceiling; whilst Annibale Angelini – famous for having restored the Logge di Raffaello in the Vatican -, Pietro Lavarello, Giovanni Scanzi, Federico Guidobono and Gerolamo Centanaro worked on the second piano nobile. The palazzo is one of the buildings that has best retained the stately aspect of Genoese residences, and is still today largely used for residential purposes, having managed to conserve its rear garden.
Updated bibliography post 1998
P. Boccardo, A. Orlando, Palazzo Interiano Pallavicino a Genova, Genova 2004
G. Bozzo, A. Brena, G. Gioia, S. Lanini, Palazzo Interiano Pallavicino, in “Arkos”, supplemento al n. 7/2004 “Il restauro dei palazzi dei Rolli”, pp. 118-121.
The texts have been updated thanks to the INSIDE STORIES project financed with funds - Law no. 77 of 20 February 2006 "Special measures for the protection and enjoyment of Italian sites of cultural, landscape and environmental interest, included in the "World Heritage List", under the protection of UNESCO.
The Rollo in the Geoportal. 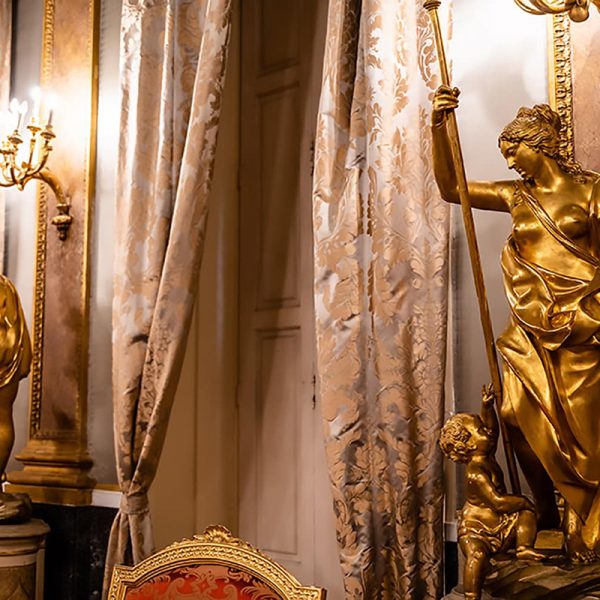 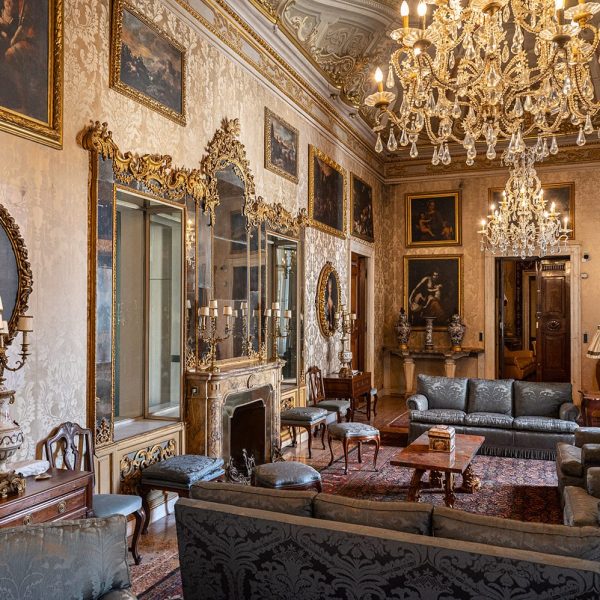 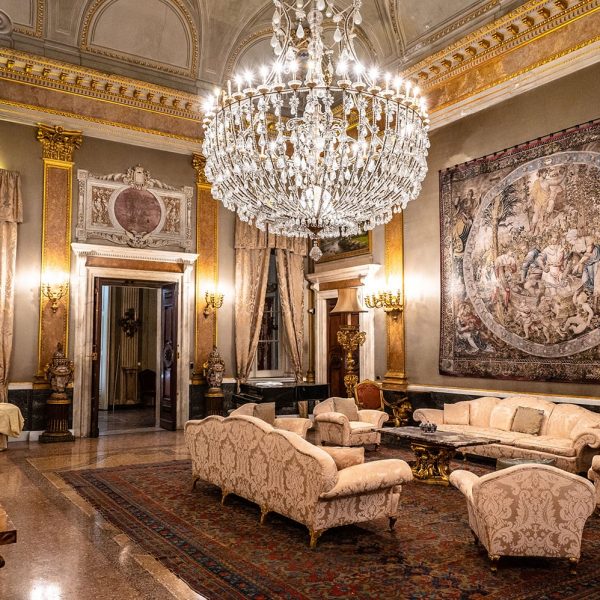 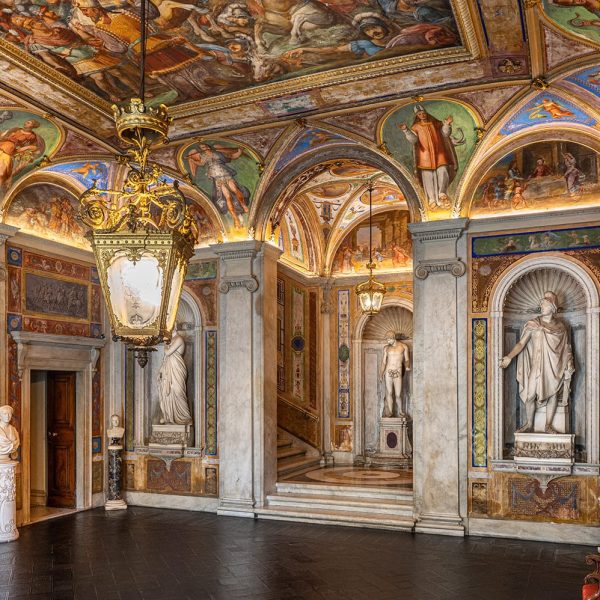 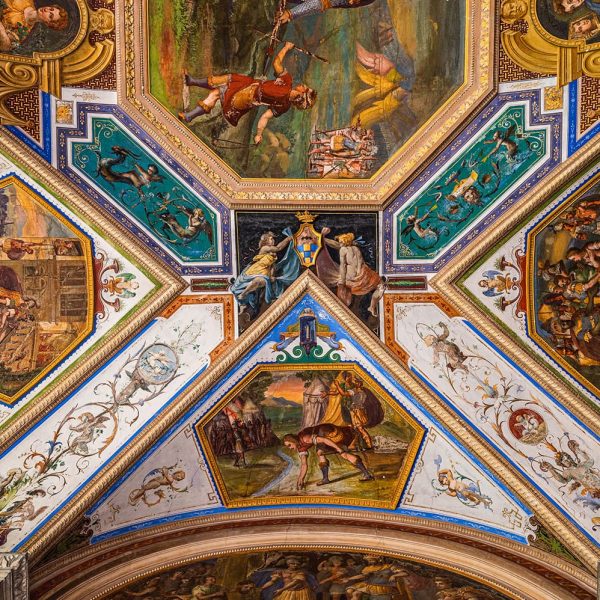