28. Palace of Giacomo and Pantaleo Balbi

Official name of the Palace:
28. Palace of Giacomo and Pantaleo Balbi

The original design is attributed by Soprani to Bartolomeo Bianco, based on a number of factors such as location of the palazzo, ownership by the Balbi, style and period. Recently this theory was supported when a number of documents were found, in which the owners, Giacomo and Pantaleo Balbi, commissioned the architect for his appraisal of the options available for the palazzo, a process started in March 1618. Bianco opted for the architectural style most deeply rooted in Genoese tradition, the simple pre-Alessio cube, but did make certain changes as to its substance.
Greater flexibility in dividing up the space is tempered by the prevalence of a very strong linear aspect: the line running perpendicular to the road, which gives a direct view from the entrance right up to the end of the courtyard. An important feature of the building, and one which runs right through Genoa’s architectural heritage, is its two superimposed piani nobili, of equivalent importance in terms of type, to accommodate the two brothers and their respective families. The 1622 etchings of Rubens, which show the plan before the alterations commissioned by Francesco Maria Balbi, son of Giacomo, are valuable.
They illustrate the stark simplicity of the façade, adorned solely by the two string courses, small balconies and a very protruding cornice.
A document of 1645 certifies that Francesco Maria Balbi was granted permission on that date by the Fathers of the City Council to carry out works on piazza del Roso.
The expansion works were entrusted to Pietro Antonio Corradi, pupil of Bianco; as well as increasing the size of the site in depth terms, he made the plan of the portico lighter and more luminous, by eliminating the two central columns of the atrium and the south perimeter wall. No trace has remained of the small trilobate nymphaeum located in the building’s south wall. When the Rubens etchings are compared with the later ones of Gauthier, one can see how the enclosed plan layout has become a more spacious arrangement, in the shape of a horseshoe, enclosing the garden. The southern end features a large new nymphaeum on two levels, with stunning effect, which hides the tiny building of the via del Roso beneath. Garden and nymphaeum are supported by massive substructures on the seafront.
Since 1980 projects to restore the nymphaeum encountered a serious and risky structural situation involving the garden supporting wall, requiring a succession of major remedial works. These were followed by the restoration of the different- material mosaics and the incrustations adorning the cave complex.
The great stucco sculptures, which certainly bring to mind the creations of the Urbino stucco decorator Marcello Sparzo, have been consolidated and restored with due regard to the high quality of the original model. Ezia Gavazza suggests that the nymphaeum depicts the Marriage of Orpheus and Eurydice, whilst the area above, dominated by the two lions and two-headed eagle (lost) has heraldic connotations.
The precious black and white cobbled paving in front of the nymphaeum has been restored following its inevitable partial removal due to the structural reinforcements; the hugely complex and beautiful design of the central path has re-emerged from beneath a conspicuous mass of earthenware fragments.
The palazzo can boast an exceptional set of frescoes due to Valerio Castello in collaboration with the quadratura painter Andra Sighizzi, dated between 1657- 59, immediately after the alterations made by Pietro Antonio Corradi.
The main Salon depicts the Allegory of Time, caught in the act of brandishing a scythe and devouring a child, on a cart drawn by the four ages of man; as Alizeri writes, “the cart sweeps away… all personal rights”; the frame depicts other symbolic figures, signifying the futility of human actions in respect of time, the essence of which is translated in the motto: volat irreparabile.
The gallery on the second piano nobile, which currently accommodates the History of Art Institute of the University’s Faculty of Letters, depicts the The Rape of Persephone and the Fall of Phaethon. The salon on the west side depicts: Abundance, Peace and Dawn, amongst mock architectures and games of putto figures.
Updated bibliography post 1998
E. Poleggi, Genova. Una civiltà di Palazzi, Cinisello Balsamo (Milano) 2002, pp. 136-140 (Palazzo di Giacomo e Pantaleo Balbi (1618-1645))
V. Fiore, Palazzo Balbi Senarega, in Città Ateneo Immagine. Patrimonio storico artistico e sedi dell’Università di Genova, Genova 2004, pp. 91-115.
The texts have been updated thanks to the INSIDE STORIES project financed with funds - Law no. 77 of 20 February 2006 "Special measures for the protection and enjoyment of Italian sites of cultural, landscape and environmental interest, included in the "World Heritage List", under the protection of UNESCO.
The Rollo in the Geoportal. 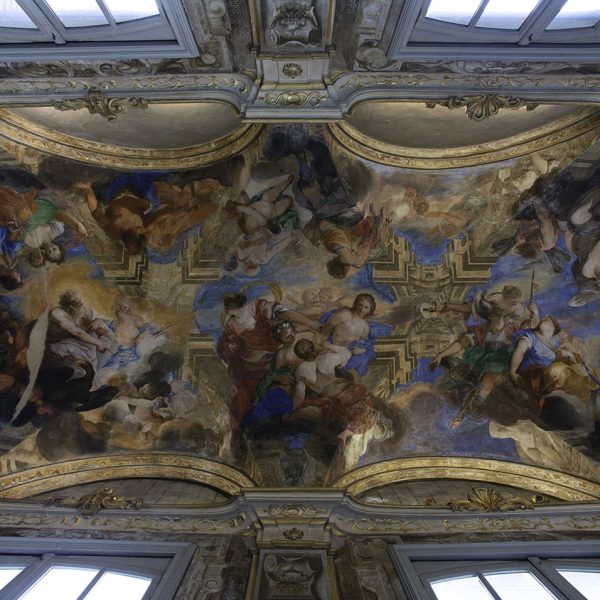 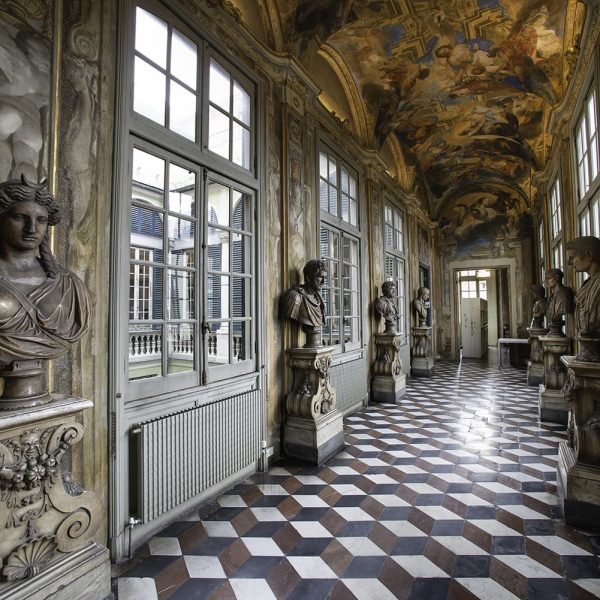 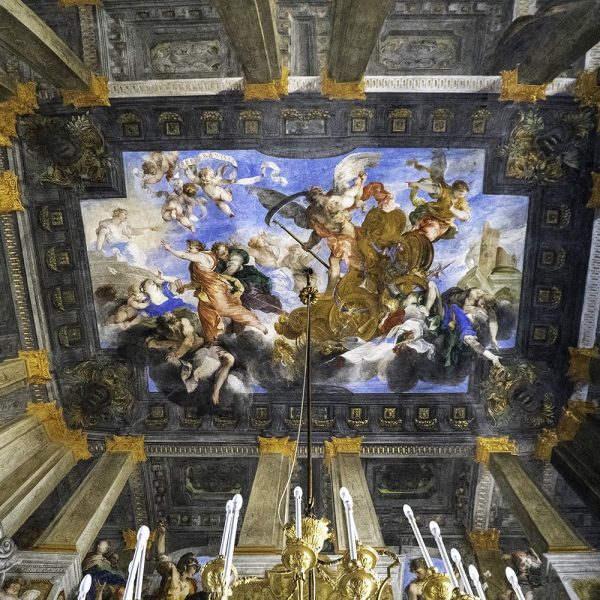 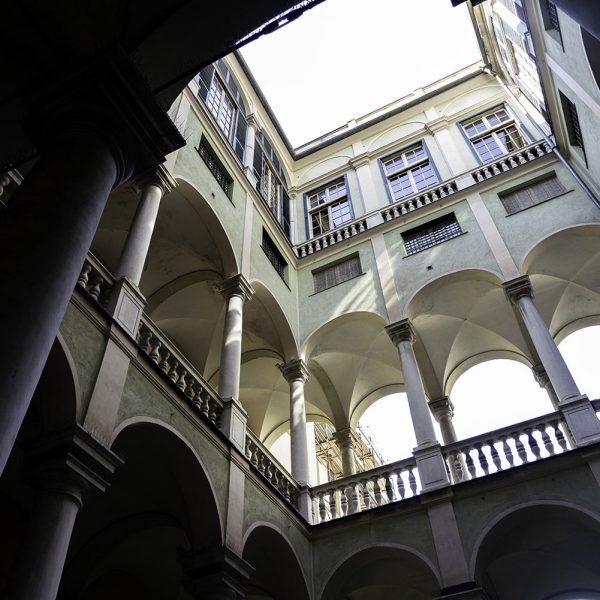 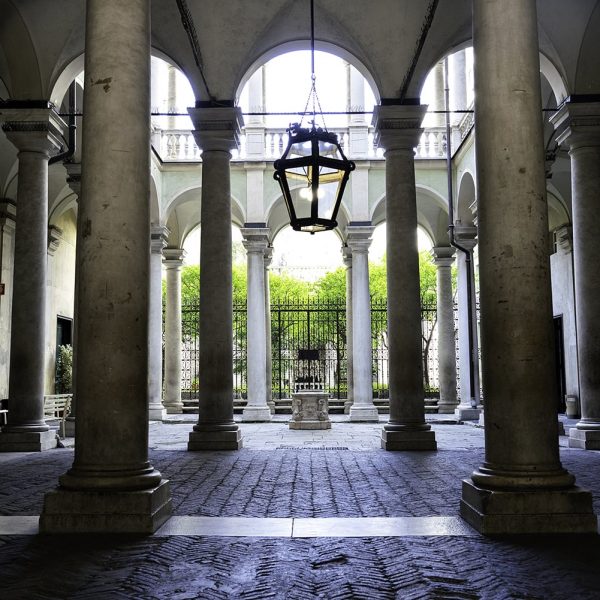